hey grant jason here-dawn just told me about the memorial you put up for my baby so i just went and looked at it,brought tears to my eyes dude thank you so much for putting it together im honored.i will be sending links of your site to everyone i know if thats cool, thanks again bud PS-get your ass out here for a beer sometime soon! jason and the redheads


What's Up With Men?

When Dean called a taxi to take him home, he had no idea how lucky he was. Frustrated and a little buzzed after watching the Canucks lose another playoff game, Dean (or perhaps one of his friends) decided it was a smarter choice to call a cab than drive from Coquitlam to his home in North Vancouver. Not only was it the smarter move, but a fortuitous one as well. For he did not just get home safely, he got to spend half an hour with Grant Kennedy, the self-proclaimed "Male Oprah".

If you are unaware who Grant Kennedy is, you are not alone. For the past four years, Mr. Kennedy has been running an Internet talk show out of Fiasco Bros. Studios in New Westminster. Like the studio - cleverly hidden within an ordinary house - Mr. Kennedy's show is perhaps one of Greater Vancouver's best-kept secrets. And while the studio has been around for 25 years (Biff Naked recorded her last CD there), Grant's show has only been around for a fifth of that time. But Grant's show - appropriately entitled What's Up With Men? - already has a long and interesting history. And a lot of its content comes from the experiences Grant has while doing his double-duty as a nighttime cab driver.

"This whole talk show thing," Grant says while driving his cab on the streets of Coquitlam, "I just happened to back into it." That such a creation could happen pseudo-accidentally would probably not come as a surprise to those that know him well, but for those on the outside looking in, the story of the show's beginnings is truly rare.

"I heard that a TV series was being filmed about people living off the land in Manitoba," Grant explains. The concept was that two couples - one older, one younger - would live without technology for a year and the winning couple would receive a significant monetary reward. "But I saw it not as an opportunity for the $100,000 but for the story behind it." In order to qualify for the show, however, Grant - single at the time - needed a significant other. So he called some of his female friends that happened to work on a radio show called Speaking Out and, after seeing them at the studio, had an epiphany.

"I thought, why don't I do my own show?" Grant recalls. His show, which would deal with everything from relationships to family law to drug addiction, could be broadcast to a potential audience of millions across the Internet. But what to call it? "One of the women at the studio, Christine, agreed with my concept and asked, 'what is up with men?' and I said, that's it, that's my title. Because I know a lot of women ask that." 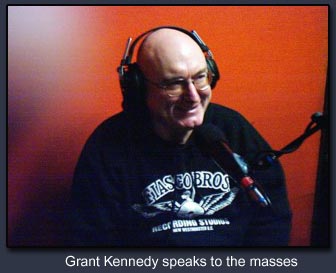 And so What's Up With Men? was born. Broadcast at 1 p.m. local time every Thursday afternoon, the show has come into its own and is now one of - perhaps one of the - most important aspects of Grant's life. "At first, it was kind of just a fun thing but now I am taking it fairly seriously. I really think this might be my destiny, my final kick at the can, you know? All my life's work has culminated in this talk show."

The content of the show has earned him the moniker of the "Male Oprah", but it is a title he relishes. He realizes he is not a Larry King or a Bill Good and that's probably the point.

"What's Up With Men is the radio equivalent of Maxim magazine," he openly admits. "We deal with the same themes and the same issues. Why re-invent the wheel? I hate to say it, but sex sells. How can you deny it?"

At the same time, it's more than a digital version of an eye-candy publication, whether people can see that or not. "All we are doing is dealing with the real, hard, life issues of breathing and living as a human being and trying to be happy. And if that happens to take us to child prostitution or something else that might make you a little squeamish, I don't make any apologies for that." Grant checks his blind spot, contemplating. "I am not trying to take on the whole world, but if everyone did a little, the world would be better."

A lot of the ideas for the talk show come from his own love for women, which he openly admits to. "I want to make my shows female-friendly. Women have the power and have always had it. If you want to please them, you'll do pretty much whatever they want." That said, he notices they tend to talk to him as the cab driver a little differently than they do to most people. It's a double-life he loves. "If you really worship women like I do, it's a lot of fun."

Grant's personal background did not start in broadcast journalism - he spent some of his childhood being raised on a farm. He has extensive experience in real estate and, at one point, even ran a hockey school with Bobby Hull. His is also affiliated with another growing Internet company, CyberTaxi.com. But the fact he does not hold any Journalism degrees is - in his view, anyway - the secret to his success.

"It's funny - here I am, not a trained journalist and I am in journalism. But I believe that is part of our charm. What could be better than a talk show about real people and real life done by a real person?"

Recent shows - archived on the website WhatsupWithMen.com - have covered the recent hockey violence debate and Suburban Idol held at the Barfly Nightclub. But trying to discern a pattern in the shows is tough to do - the method to Grant's madness is not the easiest puzzle to solve.

"You can never let them see you sweat," Grant says in the middle of a lane change. "I am not a malicious person, but if you really want to fuck with people, you smile when you should be crying. That just messes up their machinery."

Not exactly typical mainstream-media thought, is it? That's just the nature of things, Grant explains. "If you look at mainstream media, it's all young, beautiful people. I think probably I am better placed in radio so people don't have to look at me and see that I am just an ordinary person." 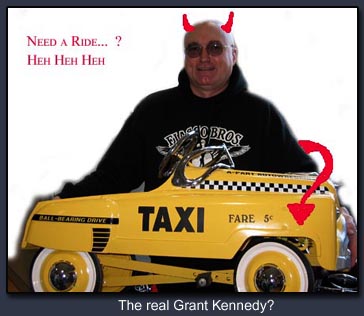 But how ordinary a person can a cab-driving talk show host be? Driving Dean perhaps provides an answer. Drunk and still embittered over the Canucks loss to Calgary (Grant will later tell the story about giving Jerome Iginla a ride in his cab), he got a little mouthy with Grant when he refused to cut him a discount fare. But after a few moments, Grant has him chatting amicably, so much so that it looks like he won't shut up.

"Do you think I'm an asshole?" he asks Grant, perhaps feeling guilty about being so difficult at the beginning. "I'm a nice guy," he says, laughing drunkenly. "I was just a little frustrated."

Grant returns the laugh and it is genuine. "You'd be happier if I had a beautiful young woman with me, I guess?" Dean laughs gutturally in agreement and soon, the two men are exchanging thoughts on the finer points of family law - both men have been through the pain of separation and have kids they cannot be with as often as they would like. It's a strange moment to watch the professional talk show host having a personal conversation with a drunken taxi fare.

"I guess I am a bit of a shepherd of the night," Grant concedes as Dean disappears into the shadows of his house. "I learn more about human nature in this cab than I could anywhere else."

No one is more aware of Grant Kennedy's mortality than Grant himself, and from talking him for two hours on a cool spring evening, you can sense it is something he is constantly pre-occupied with. But if his biological clock is ticking down, his energy, thirst for knowledge and need to make a difference in people's lives is only strengthening.

"I believe now - and I tell this to all the kids that will listen to me - that you have to follow your dreams, heart, ambition and your passion or you will not be truly happy." He pauses as he pulls up to a red light, perhaps thinking of himself sitting in the little broadcast studio in New Westminster. "You might be broke, but at least you'll be happy."

Dear Grant:
I live in a small town in the Texas hill country near San Antonio, Texas. Imagine my surprise when I logged in to your program and heard "What's up with Men Dot Com". I knew that the women in Texas are the best looking in the world and now they are the most talented as well. Can't wait to hear what they have to say when you interview them.

Congratulaions on a great addition to your show!

I want to express my gratitude for your support of me and my girls. It's not often that one encounters such generosity.

Though I'm not so good at keeping in touch at this stage of my life, please know that I appreciate and am aware of your efforts.

Take care and I'll talk to you soon.